So, many people who know me, know about my dog, Gambit. In case you don’t know, here’s his story:

The star of the Dingo Series: Gambit (50lbs of love and ears.)

In 2001, a stray dog followed my neighbor home after a stroll through Memorial Park. Knowing how much I loved dogs, he thought I might be the perfect victim to pawn this dog off on. Well, he was right. One look into this dog’s huge brown eyes, made me fall in love. It was hard to tell what he was mixed with: maybe part Dingo, part Chow, part German Shepard with a hint of a fruit maybe?  Regardless, he was perfect.

I soon learned what a great dog he was. Not only was he loyal and a huge mama’s boy, but he had great facial expressions. I couldn’t resist having real human conversations with him as he shot glances of understanding and concern my way. Having owned a dog before (the blue dog in my Childhood Series) I was not unfamiliar to these looks, but it seemed that they were particularly strong and overpowering in this specific puppy.

After much deliberation (maybe 5 seconds) I decided to keep this dog and went ahead and named him Gambit, after my favorite Cajun X-Men. What I failed to mention, was that same day my mom’s neighbor had found a helpless deathly ill kitten and pawned her off on me as well. So in one day, I became a new dog & kitten owner and they became the best of friends. I went on to name the new kitten, Yoshi, after my favorite Super Mario character though she’s referred to more often than not as just Kitty.

I managed to squeeze 12 beautiful years of memories, laughter, love & life from Gambit, but unfortunately in March 2013 it was time for him to go frolic with the angels in the ginormous luxury dog park in the sky (watch his video tribute here).

Through the years, I have found much joy illustrating Gambit and sometimes Kitty, in various scenarios and as different characters. A lot of people have gotten a kick out of these illustrations, especially my family and past co-workers, so I have finally decided to add this part of my creative spark to my website for others to share and smile in “The Dingo Starring As…” series, The Dingo Loves JAX series, and last but certainly not least, The Dingo Walks in Love. Check them all out & I hope you enjoy. 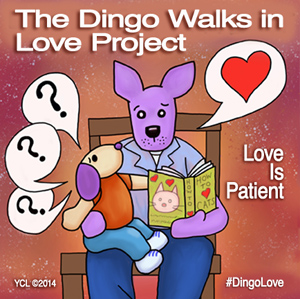 Click the pic to view The Dingo Walks in Love project 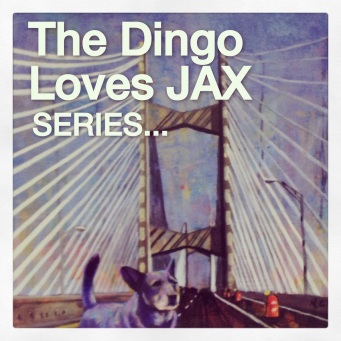 Click the pic to view The Dingo Loves JAX series 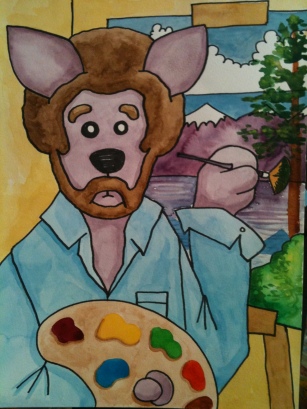 Click to view the “The Dingo Starring as…” Series

9 thoughts on “The Dingo Series…”